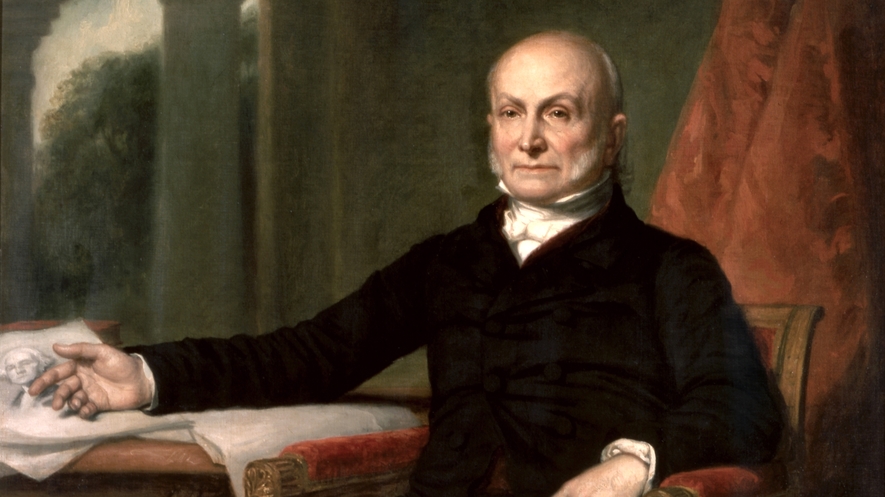 President John Quincy Adams, Believer in God and Student of the Bible (Part 1)

I recently saw on the internet that the president with the highest IQ (at 163) was John Quincy Adams. Even if this is mere guess work, it is still impressive.

But what is seldom noted is that JQA (his usual designation) was a believer in God and a devout student of the Bible.

The Pulitzer Prize winning historian, James Truslow Adams (unrelated to JQA), in his The Adams Family, write: “John Quincy Adams believed profoundly in God. For him God was not a rarefied philosophical abstraction, a mere name for the Unknown, but a Being who ruled the universe. If his rule were not a beneficent one, all meaning would drop out of human existence and human morality. To deny that there was meaning to existence, and reality to moral belief and conduct, would be to commit intellectual and spiritual suicide.

“For Adams no amount of material comfort and well-being, either for the individual or the nation, could compensate for the void created by the denial of a God, and consequently of meaning in a moral universe. Adams also believed that man had been given mind, and its product, science, for the purpose of improving the condition of the race. He had also profoundly believed in his country”

“He was a diligent student of the Word of God. It was the delight of his great and discriminating mind to be daily refreshed at this fountain of Divine Wisdom; and it is our deliberate judgment that not only the stern integrity of his private life, but his widely extended influence, as a ruler and legislator, as advocate of human rights, and a patriot and philanthropist, is to be attributed to his long and intimate familiarity with the eternal laws of truth, love, and righteousness, which are revealed in the Holy Scriptures.”

Lanny Tanton is the Pastor at The Bible Church of the Lakes in Horseshoe Bay, Texas – just outside of Marble Falls.  Pastor Tanton welcomes you to our website and hopes that you’ll enjoy reading these insightful blog posts.  Please contact us if you have further questions!!

This site uses Akismet to reduce spam. Learn how your comment data is processed.

The Bible Church of the Lakes

Start saving your extra coins and dollar bills to stuff the bottle with cash to help this local ministry serve their needy clients with basic maternity and baby items. Disposable diapers, baby wipes & infant clothes are needed, too!

Contact Karen Miller for more details about this fundraiser.

David Pope’s childhood on a small family farm in Texas provided him with a sound platform for life. He trusted Christ for his salvation as a young person. After graduating from the University of Texas, he became a CPA. After his 40 year professional career, he and Nelda, his sweet wife of 58 years, retired in Horseshoe Bay. David and Nelda became involved at BCL in its early days and they continue to faithfully serve in the church in several capacities. David’s hobbies are hiking, golf and reading. He has traveled extensively around the world. Psalm 23 is his favorite Bible passage.

Dan Miller put his faith and trust in the Lord Jesus Christ in response to the gospel that his Sunday school teacher presented when he was 5 years old. His Christian faith continued to be nurtured in his home and local church during his youth. Throughout his adult life, he has been involved in children’s ministry within his local church as well as a Christian youth camp ministry. Proverbs 3:5-6 is his favorite Bible passage. Dan works as a sales manager for a manufacturing firm. His hobbies include hiking, fishing, woodworking, gardening and reading. Dan has been married to his wonderful wife Karen for 41 years and they have three grown children.

Bob Goetz spent his most of his childhood in Kansas and then served four years in the US Navy. After earning his bachelor’s degree, he became a professional golfer who toured for many years with the PGA through-out the USA as well as internationally. Upon retirement, he is still active as a golf pro at a local country club. Bob says that his thinking and priorities in life changed when he heard “Faith alone in Christ alone” backed up by John 14:6, which is now his favorite Bible verse. He and his wife Jo Ann (deceased) came to BCL about 10 years ago. He currently leads the music during our Sunday morning Worship service.

Jerry Cloud, who grew up in Odessa Texas, was saved and baptized at church during his high school years. While he attended a church youth camp in New Mexico, he met his future wife, Lynn. They were married on New Year’s Day forty-six years ago and have 2 beautiful children and 5 grandchildren. He enjoys reading his Bible, golf, shooting guns, playing guitar and admiring God’s creation in nature. Jerry quotes Revelation 4:11 every day when he gets out of bed. The verse tells him that “God is my Creator, and He is giving me this day to live by His grace, so He is worthy of all glory, honor and power.”

The Bible Church of the Lakes